Monks, Marauders and Merchants: A Walk through Medieval Dublin 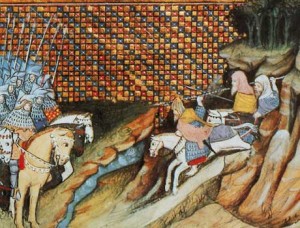 Dublin’s origins lie in two pre-Viking settlements, one monastic, one secular, but it was the Vikings in the ninth century who made Dublin the trading centre which three centuries later attracted the attention of the English crown. Although geographically small compared to other European medieval capitals, Dublin was a cosmopolitan town, with the homes of wealthy merchants, meat and fish sellers, bakers and brewers all jostling for space within its walls.

Today much of the physical remains of the medieval city are in the cathedral quarter, in the area of St Patrick’s and Christ Church Cathedrals, both of which are themselves originally medieval. The medieval street names in this area reveal much about their past – Cook Street, Fishamble Street, High Street, Cornmarket. Although Dublin Castle was the administrative centre for medieval Ireland, a walk through the surrounding streets reveals how the politics and policies emanating from the Castle officials were implemented (and ignored) by the Irish, English and Norse inhabitants.

For further information on this tour please contact us at: